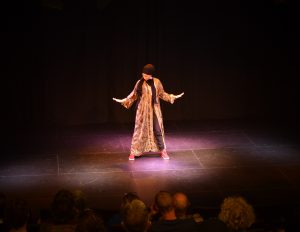 The RCC Diversity Planning Board sponsored a pair of performances that challenged audience members to reevaluate their thoughts about stereotypes. Amirah Sackett, the American-born creator of the hip-hop dance group “We’re Muslim, Don’t Panic,” presented her beautifully choreographed performance entitled “Love Embraces All.”

What stood out was her attire: a floor-length shimmery gold abaya with a black hijab, paired with a pair of colorful Nike sneakers. To Sackett, her look embraces the two different sides of her; the American hip-hop girl from Chicago, and a side that embraces the fact that she is Muslim. Sackett explains that in her mind, this partnership of fabrics represents Americans and Muslims coming together.

The artist recognizes that this imagery easily scares people. The young artist grew-up gaining peaceful and respectable Muslim role models, and now she wants to flip the script so others may see the peace behind the Muslim community and the beauty behind the hijab.

In a Q&A session many questions were raised. One man asked Sackett why we should not fear people of the Islamic religion.

Sackett answered, “Those people that we see in the media…They are using the face of religion to gain political power. They are the contradiction of everything Islam.”

Sackett continued by quoting the Koran, the religious text of Islam, “Whoever kills an innocent person, it is as though he has killed all of mankind.” Not all African Americans are criminals, and not all Muslims have violence in their hearts. “We as a society need to stop clumping everyone together. ISIS is not my brother, I have nothing in common with them,” she said.

She asked everyone to recall any time they had seen a nun in person, in a movie, or in a picture. A Mother Superior is always covered from head to toe. Sackett said we see these women dressing modestly out of the respect for their religion. 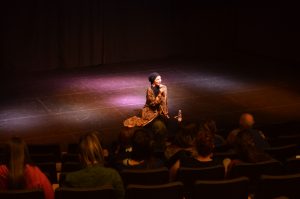 To her the hijab is a freedom of choice. “As a woman, I can’t change the people who see me, but I can change how someone sees me. The hijab gives a woman power and protection,” Sackett explained. She lightened the mood by joking that she could eat whatever she wants and no one is going to judge her for putting on a few extra pounds.

Despite her fun loving and quirky personality, she was serious about her message. Women’s bodies and sexuality are used to advertise and sell products. Which creates an image that women need to strive for perfection. She says the hijab makes her feel safe and protected from being sexualized by men. “The wanting to be sexy thing is just too much, why not wanting to be smart instead?”

An RCC student asked what we can do to better understand Muslim culture. She said simply, “do not be afraid to ask.” If you ask respectfully, a Muslim will be more than happy to answer any questions.

The Diversity Board’s objective in bringing Amirah Sackett to RCC was to increase awareness of diversity issues and to promote a community of inclusion and understanding.

Sackett said, “Challenge your stereotypes. We have all been judged. It’s tough dealing with people’s assumptions of you.”

For more information on Amirah Sackett, you can follow her on Facebook at: We’re Muslim Don’t Panic.

For more information on the goals, history and future events held by the Diversity Board visit their RCC webpage.