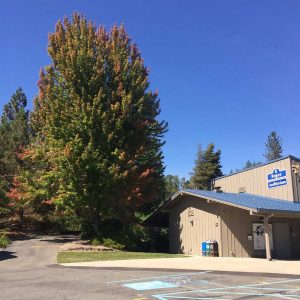 You may have noticed the Autumn Flame Red Maple (acer rubrum) next to the Rogue Auditorium on the Redwood Campus was recently removed. It was a favorite tree of the RCC Arboretum, and we are sad to lose it.

However, there were two reasons why the tree needed to be removed: The auditorium restrooms are being expanded to accommodate people with disabilities as prescribed by the Americans with Disabilities Act (ADA), and the tree also had a bacterial disease that would have eventually necessitated its removal.

There is good news! The college will plant a new tree of the same species somewhere else on campus, keeping the arboretum healthy and vibrant.

There are many beautiful and unusual trees in the RCC Arboretum. To see a video of the arboretum or download a walking tour map, go to http://web.roguecc.edu/rcc-arboretum. Tour maps are also available at the library and Student Services on the Redwood Campus.