Rogue Community College is an economic engine for Southern Oregon that generates more than $239 million annually for the region’s economy, according to an economic impact study released earlier this year.

The analysis by Economic Modeling Specialists International (EMSI) of Moscow, Idaho, examined data from fiscal year 2015-16 to calculate the impact of RCC’s operations and student spending as well as the higher earnings of alumni who entered the regional workforce with new skills after studying at RCC.

The study found RCC creates a significant positive impact on the region’s economy with a high return on investment for its major stakeholder groups – students, taxpayers and society. The overall impact of RCC on the local business community amounts to $239.4 million in added income, the equivalent to supporting 4,500 jobs. 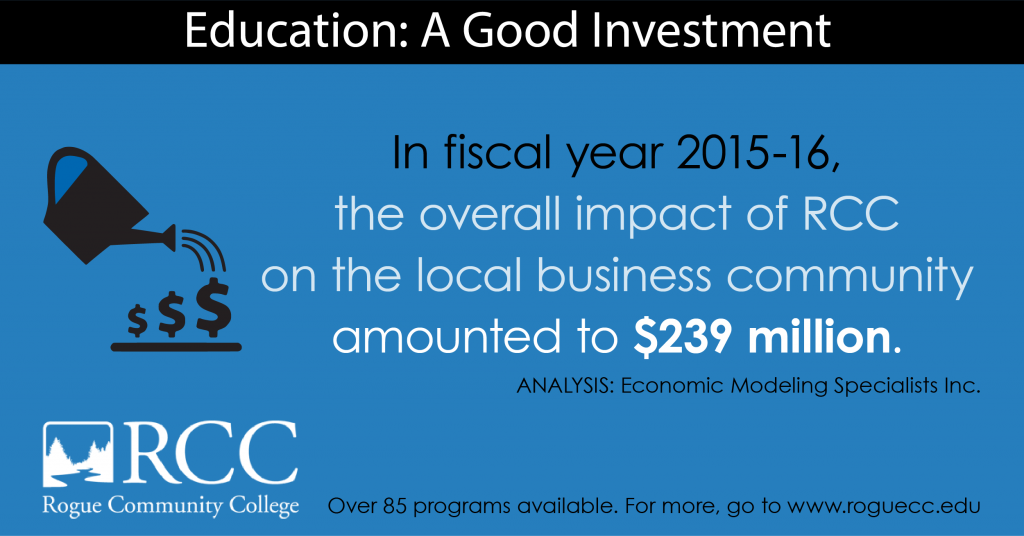 In fiscal year 2015-16, RCC employed 727 full-time and part-time employees with a payroll of $42 million, much of which was spent in the region to purchase groceries, clothing and other household goods and services. The college itself is a large-scale buyer of goods and services, spending another $26.5 million to cover expenses for facilities, professional services and supplies.

RCC students also have a significant economic impact. In academic year 2016-17, RCC delivered to its students $21.5 million in financial aid, and RCC Veterans Services certified a net of $5.4 million in Veterans educational benefits, according to RCC Financial Aid Office data. The EMSI study estimates students in 2015-16 spent $28.4 million to pay for rent and transportation as well as groceries and other household expenses, with an estimated 83 percent of those dollars staying in the region. 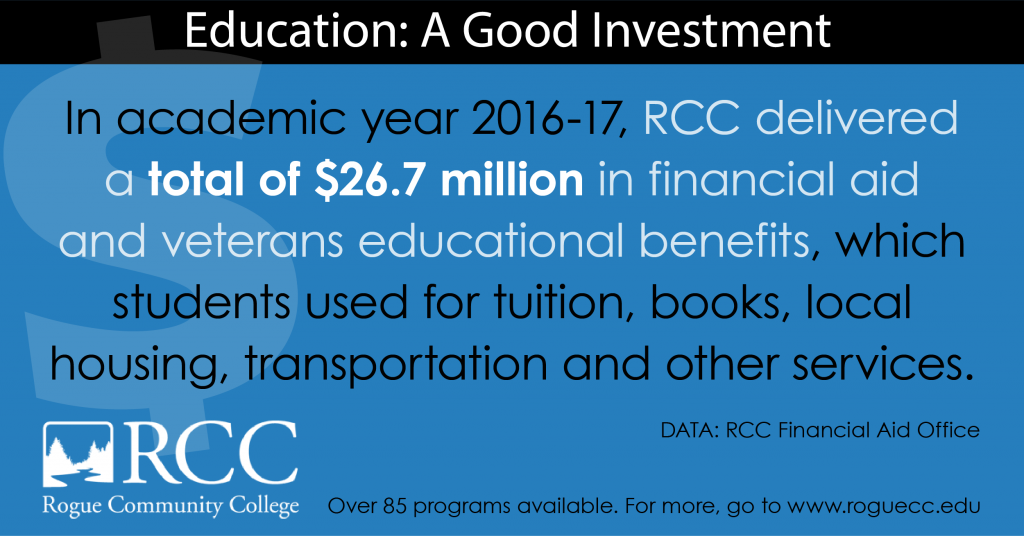 We know wages tend to increase as students attain higher levels of education. At the midpoint of their career, an Oregon employee with an associate’s degree will earn an average of $30,300 per year – that’s $8,400 more than someone with a high school diploma. Over a working lifetime, this adds up to $344,400 in higher earnings.

With thousands of former students employed in the Rogue Valley, past and present students of RCC generated $159.2 million in added income for the region during the analysis year.

Return on Investment
In 2015-16, RCC students invested a total of $50 million in their education; they paid $20.8 million to cover the cost of tuition, fees and supplies, and sacrificed $29.2 million in money they would have earned had they been working instead of learning. However, for each dollar students invest in their education at RCC, they receive $3.80 in higher earnings.

The average annual rate of return for students is 13.9 percent. This is an impressive return, especially when compared to the 10-year average 7.2 percent return to the U.S. stock market.

For every taxpayer dollar the state invests, Oregon gets back $2.70 in tax revenues and public sector savings.

Overall, for every dollar spent on RCC, society as a whole will receive $7.90 in added state revenue and social savings. The savings come from reduced crime, lower unemployment and better health and well-being across the state.

Read about the impact Rogue Community College has on the region’s economy in the full EMSI report and fact sheet: